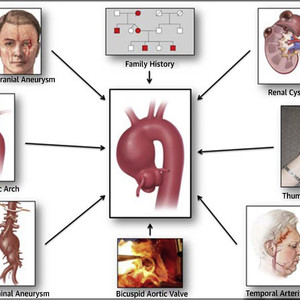 The Normal Aorta: Characterization Based on 15,000 CT Scans

Aortic aneurysm first gained purchase in general medical practice with the realization of the prevalence of abdominal aortic aneurysm (AAA) in older patients. Although there has been a decline in AAA incidence as a result of the decline in cigarette smoking, population-based studies in men older than 60 years still report an AAA prevalence ranging from 1.2%-3.3% . This prevalence of disease, coupled with the demonstrated benefits of finding an AAA, surveilling AAAs as they grow, and repairing them upon reaching 5.5 cm has justified the recommendation by the US Preventive Services Task Force to screen men aged 65 to 75 years who have ever smoked .

In contrast, despite recent increasing interest in aneurysm of the thoracic aorta, the prevalence of thoracic aortic aneurysm remains less well characterized. This is understandable, as full imaging of the thoracic aorta requires more than just an echocardiogram, necessitating either computed tomographic or cardiac magnetic resonance imaging. Moreover, large axial imaging studies to define population size norms have been lacking. Currently, the best estimates of thoracic aortic aneurysm are derived from a systematic review and meta-analysis, which recently calculated a prevalence of ∼0.16% . Moreover, the normal diameter of sequential aortic segments remains poorly defined. Population-based evaluation has been lacking, although some data is available in particular populations like those referred for evaluation of coronary artery disease . It is into this space that the DANCAVAS (Danish Cardiovascular Screening Trial) investigators provide important new data.

We congratulate the authors of the paper, published in this issue of the Journal, based on the DANCAVAS I+2 (Danish Cardiovascular Multicenter Screening Trial) for their contribution . They provide valuable fundamental data on: 1) normal aortic diameters at different anatomic levels; 2) the prevalence of aortic disease; and 3) prediction of the presence of aneurysm—all in men from the general population aged 60-74 years. It is important to clarify that the predictive information does not concern the onset of complications of aortic disease, but rather the presence of aneurysm. Of the 78,000 participants invited to participate in screening computed tomographic (CT) scans, an impressive 15,006 patients underwent gated, noncontrast CT screening.

Measurements were taken at prespecified anatomic landmarks along the course of the aorta, except when aneurysm was noted, in which case the maximal aneurysmal diameter was used. Measurements were taken outer-wall-to-outer-wall, as recommended for noncontrast images . The authors defined a “dilated” aorta as 25% larger than the “individual expected normal aortic diameter” and an aneurysm as “a 50% increase.” The authors set upper limits for normal diameter of the aorta at very reasonable values: 40 mm for the ascending, 35 mm for the arch, 30 mm for the descending, and 25 mm for the abdominal aorta.

The authors report that increasing age and body surface area correlated directly with aortic size. The aortas in men were consistently 2.5-4 mm larger than those of women. The strongest predictor for aortic dilation in any location was dilatation at another aortic location. Other important predictors for the presence of aneurysm included a family history of aortic aneurysm and hypertension. In contrast, diabetes mellitus was negatively correlated with the presence of aneurysm . All of these are well-known relationships, more firmly confirmed by the huge body of anatomic data in the Danish study.

Several important questions arise from these results. First, should screening programs be organized for thoracic aortic aneurysm? We would argue that the prevalence of 0.1% for both men and women is far too low to screen routinely among the general population. Second, are there conditions that increase the risk sufficiently to merit axial imaging? The presence of aortic aneurysm increased the odds ratio by ∼2- to 5-fold for dilation in other segments of the aorta. However, with a background prevalence of 0.1%, it becomes difficult to provide a strong support for wide imaging. No other predictor was associated with a higher odds ratio, so we would not recommend screening on the basis of aneurysm save for specific genetic conditions such as bicuspid aortic valve disease or Marfan disorder. Although the authors endorse the use of imaging when a single aortic dilation is noted, it remains unclear whether there is value in full aortic CT imaging in this circumstance.

We believe that a significant contribution of this study is the cataloging of normal aortic dimensions, based on careful calculations in thousands of patients from the general population. The detailed imaging assessments in this study will be an important backdrop both for clinical care and for future research. It is important to point out that, appropriately, because no contrast was used, the authors made no effort to include the aortic root in their study. Indeed, the aortic root is difficult to image and measure , especially without contrast.

It should be noted that other conditions known to be associated with aortic aneurysm were not investigated. These may (or may not) provide a stronger association with aneurysm to recommend screening. These “guilty associates” include bicuspid aortic valve, bovine aortic arch, renal cyst, hepatic cyst, temporal arteritis, and a positive thumb-palm sign. 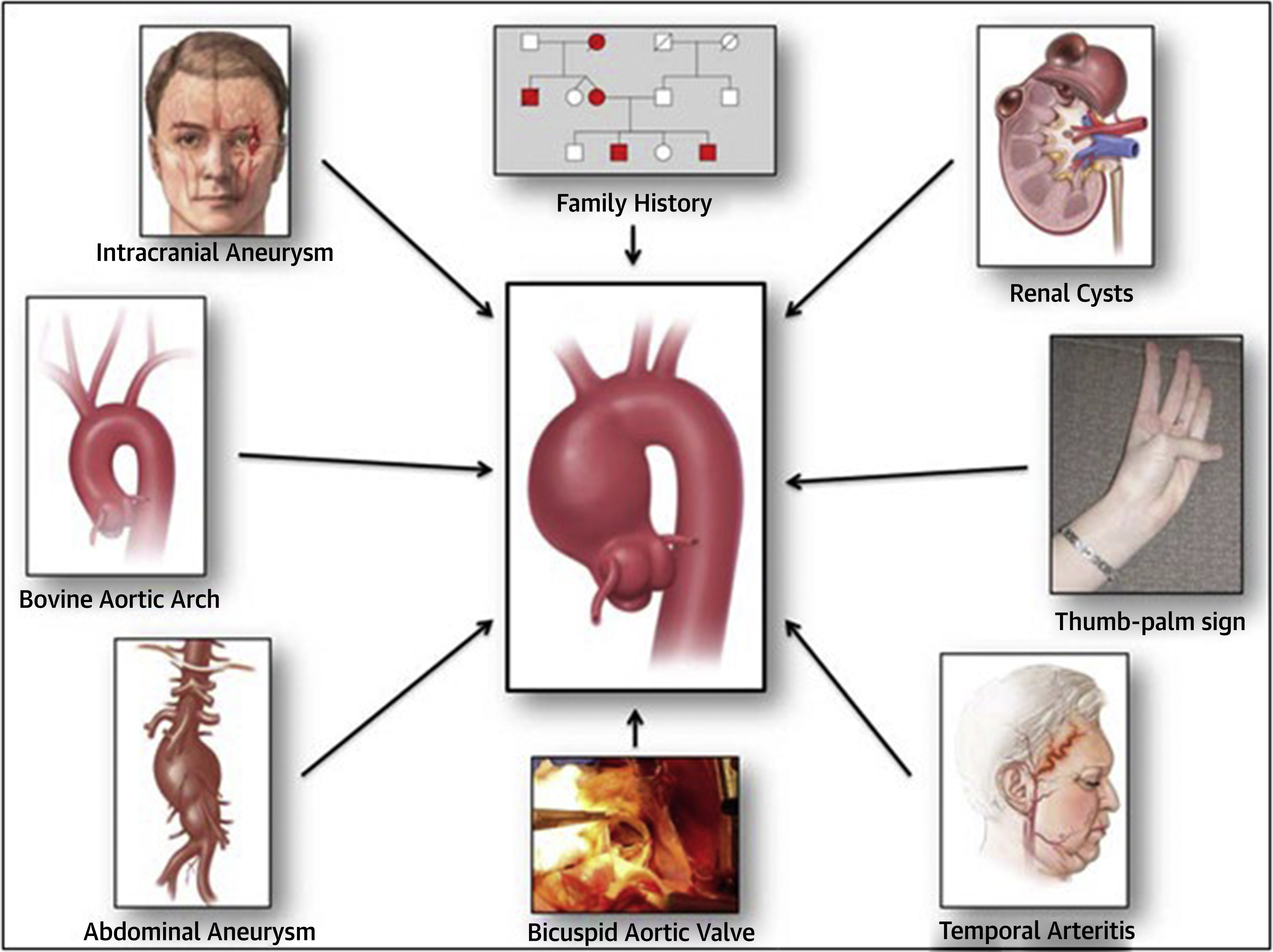 We suggest that the authors’ high ORs for having an arch aneurysm when a patient has an ascending or descending aneurysm be taken “with a grain of salt.” The arch is a very small longitudinal component of the thoracic aorta (especially on the inner surface [concavity]). It is very rare, anatomically, to have an arch aneurysm without an ascending or descending dilatation. So, although very high ORs were calculated for association of adjacent segments with arch aneurysms, these are misleading because they merely represent anatomic continuity, not a “second” aneurysm.

The lack of association between peripheral artery disease and ascending aortic aneurysms adds to a growing body of knowledge demonstrating an inverse association between the aneurysmal process (in the ascending aorta) and atherogenesis. This is well demonstrated with low intimal medial thickness, low total body calcium scores, and near total absence of myocardial infarction in patients with root and ascending aneurysm .

In summary, this work provides great value for its delineation of normal aortic morphology, establishing evidence-based normal values for the different aortic segments, and adding substantiation to current understandings of association of aneurysms with other conditions. The authors’ findings suggest that no significant alterations in current clinical practice are necessary.