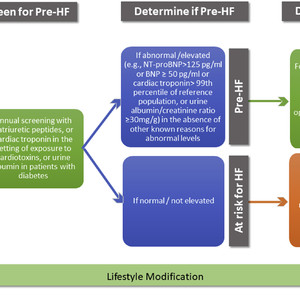 It Is Time to Screen for Heart Failure: Why and How?

There has been significant progress in our ability to identify future risk of development of heart failure (HF). This includes detection of certain biomarkers, genetic and molecular markers, and structural or functional cardiac abnormalities before development of symptoms or signs of HF. There are also significant advances in our ability to treat risk and prevent future development of HF. According to the 2022 American Heart Association (AHA)/American College of Cardiology (ACC)/Heart Failure Society of America (HFSA) Guidelines for the Management of Heart Failure, optimal treatment of hypertension and cardiovascular disease, treatment of diabetes with sodium-glucose cotransporter-2 inhibitors (SGLT2i), multidisciplinary management of patients with exposure to cardiotoxic agents such as chemotherapy, and genetic screening and counseling in family members of individuals with inherited or genetic cardiomyopathies are indicated to prevent HF. In addition, treatment with angiotensin converting enzyme inhibitors (ACEis) (or angiotensin receptor blockers if ACEi intolerant) and beta-blockers is indicated in patients with left ventricular (LV) systolic dysfunction even in the absence of symptoms or signs of HF.

The presymptomatic stages of HF were historically defined as stage A (asymptomatic, without structural or functional cardiac changes) and stage B (asymptomatic but with structural or functional cardiac abnormality). Despite their inclusion in guidelines, these stages have not been widely adopted by non-HF specialists, understood by patients, or incorporated in coding, billing, or health coverage plans. In other chronic disease, however, at-risk or pre-stages, such as precancer, are clearly understood by patients, incorporated into care, and covered by health plans. With an intention to make the terminologies explicit for nonspecialists and patients, to facilitate coverage for screening for risk, and to clarify the indication for treatment and prevention in these presymptomatic stages, the stages of HF were revised in the Universal Definition of Heart Failure. Former stage A HF was revised as “at risk for HF,” defining patients with risk factors for HF such as diabetes, hypertension, coronary artery disease (CAD), obesity, family history of cardiomyopathy, and exposure to cardiotoxicity, but without current or prior symptoms or signs of HF and without structural, biomarker, or certain genetic markers of heart disease. Former stage B was revised as “pre-HF” with new diagnostic criteria, which include evidence of structural or functional heart disease or elevated natriuretic peptide levels or elevated cardiac troponin, especially in the setting of exposure to cardiotoxins. Similar new terminologies and diagnostic criteria for stages of HF were adopted in the 2022 AHA/ACC/HFSA Guidelines for the Management of Heart Failure. Biomarker abnormality by itself is a new criterion for classification of pre-HF (former stage B) in the Universal Definition of HF and the 2022 HF guidelines and can help to detect a higher risk for HF in patients with risk factors. Given the increasing prevalence and burden of HF, high proportion of the population with attributable risk and the relative risks of hypertension, CAD, diabetes, and obesity for development of HF, screening for HF is more important than ever. Very similarly to cancer prevention, we need to move the needle to earlier detection and prevention.

In the 2022 AHA/ACC/HFSA Guidelines for the Management of Heart Failure, for patients at risk for HF (stage A), natriuretic peptide–based screening followed by team-based care, including a cardiovascular specialist optimizing guideline-directed medical therapy, is included as a Class IIa recommendation. This approach can be useful to prevent development of LV dysfunction (systolic or diastolic) or new-onset HF, as supported by the findings of the large-scale STOP-HF (St Vincent’s Screening to Prevent Heart Failure) study, which enrolled patients at risk of HF but without established LV systolic dysfunction or symptomatic HF at baseline, and performed B-type natriuretic peptide (BNP) testing annually. Intervention-group participants with BNP levels ≥50 pg/mL underwent echocardiography and collaborative care between their primary care physician and specialist, including education on adherence to medication and healthy lifestyle behaviors. The intervention group underwent more cardiovascular investigations and received more therapy at follow-up which resulted in significant reduction in development of LV dysfunction or HF.3 In a similar study, the PONTIAC (NT-proBNP Selected Prevention of Cardiac Events in a Population of Diabetic Patients Without A History of Cardiac Disease) trial, patients with type-2 diabetes and increased levels of N-terminal pro-BNP >125 pg/mL, but free of cardiac disease, were randomized to standard treatment or an intensified strategy in which they were treated at a cardiac clinic for the up-titration of renin-angiotensin-aldosterone system inhibitors and beta-blockers. Intensified strategy resulted in significant reduction in cardiovascular hospitalization and death.

Despite the evidence from these trials and recommendations in HF guidelines, screening is not commonly incorporated into clinical practice and coverage is not ascertained. In addition to natriuretic peptide and cardiac troponin, new markers, such as urine albumin-to-creatinine ratio, are increasingly recognized as risk factors for HF and can help to identify patients who may benefit from specific treatment strategies known to reduce HF risk. Taking these into consideration, a contemporary approach for screening patients at-risk for HF is conceptualized in Figure 1. In this framework, patients at-risk for HF would be periodically screened to detect development of pre-HF, which would prompt care coordination, closer follow-up, and optimization of specific therapies to prevent HF. 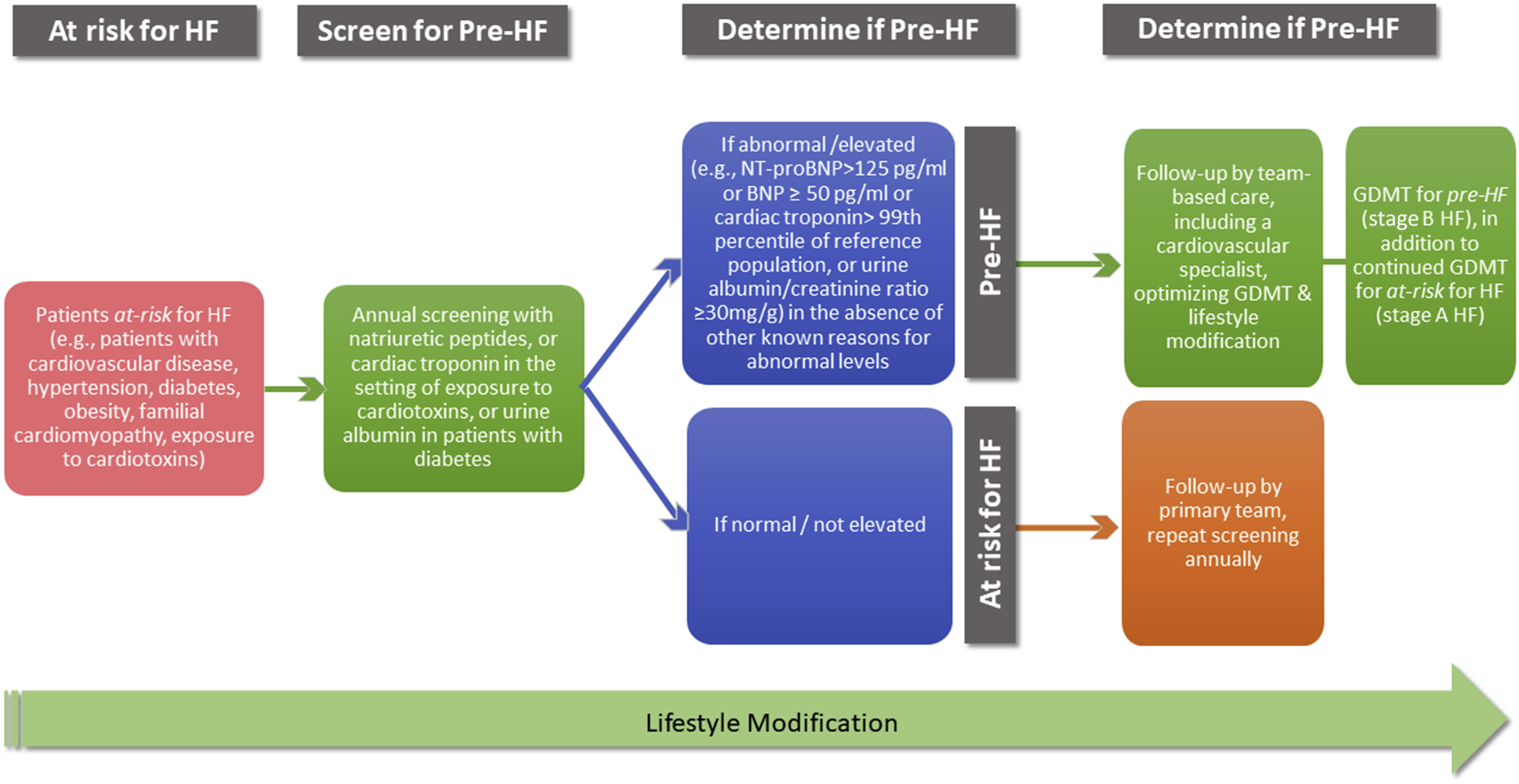 A Contemporary Approach for Screening Patients at Risk for Heart Failure

In summary, it is critical for clinicians to be aware of the new diagnostic criteria for pre-HF and recommendations for natriuretic peptide–based screening. It is also critical for health plans and systems to ascertain coverage and implement screening of patients at-risk for HF. In the future, as targeted treatment strategies evolve for prevention of HF, as with cancer, other biomarkers, genetic or molecular, may be part of an evolving screening strategy.