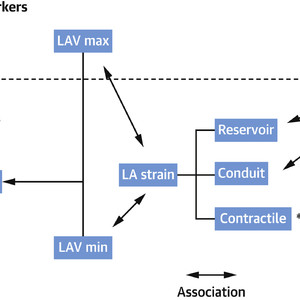 Measurement of the left atrial (LA) volume index is a standard when evaluating the left atrium in echocardiography. The LA volume index is 1 of the 4 key components in the diastolic assessment algorithm in the current guidelines. Despite the guidelines focusing on maximum LA volume (LAVmax), the left atrium is a dynamic structure, in which size, shape, and function (strain) change continuously during the cardiac cycle. Consequently, over the last 2 decades, numerous work has been done in novel LA markers, such as LA minimal volume (LAVmin), LA emptying fraction (LAEF), and LA strain (reservoir, conduit, and contractile).

LAVmax reflects severity and chronicity of left ventricular (LV) filling pressure, corroborated by prognostic evidence.  However, LAVmax has limitations in detecting early increases in LV filling pressure and does not primarily reflect LA intrinsic function, as it is significantly influenced by LV systolic function through systolic descent of the mitral plane. LAVmin has been proposed as a new and potentially better marker of the left atrium.  LAVmin may be more closely related to LV filling pressure and clinical outcome than LAVmax because it is measured at LV end-diastole when the left atrium is directly exposed to LV end-diastolic pressure. Previous studies showed that LAVmin is more strongly correlated with diastolic function and N-terminal pro–B-type natriuretic peptide (NT-proBNP), but prognostic data were reported in limited studies.

In this issue of the Journal of the American College of Cardiology, Inciardi et al reported a detailed observation from the ARIC (Atherosclerosis Risk In Communities) study. They analyzed 4,901 echocardiograms and then compared novel LA markers with NT-proBNP and a clinical composite outcome of heart failure or death. There were 3 main findings. First, the authors determined normal limits by using 301 participants from a low-risk reference subgroup. The upper reference limits for LAVmax and LAVmin were 39.4 and 18.1 mL/m2. Although the mean values were similar to a previous meta-analysis (36% in ARIC vs 39.4% in meta-analysis for reservoir, 17.1% vs 23% for conduit, and 18.1% vs 17.4% for contractile), the lower reference limits were lower (28.2% vs 38% for reservoir, 11% vs 20.7% for conduit, and 11.7% vs 16.0% for contractile). The discrepancy can be explained with the elderly population (age 75.2 ± 5.05 years in ARIC vs mean age 25-68 years in the meta-analysis) and vendor difference (single vendor–dependent software vs various software). Therefore, it is important to pay attention to these factors when interpreting or applying these normal values to local settings.

Second, the authors observed independent associations between all measures of LA structure or function and NT-proBNP, after adjusting for clinical confounders and measures of LV systolic and diastolic function (all, P < 0.001). This is the major strength of this work in terms of novelty as normal values and clinical outcome have been reported previously. Because NT-proBNP is an established serum biomarker in heart failure, the independent associations underscore the importance of the left atrium. The authors also reported a nonlinear relationship of novel LA markers with NT-proBNP, with even steeper slope of relationship at higher NT-pro BNP levels. This finding indicates that the associations become stronger among higher risk individuals, emphasizing better performance of the novel LA markers in the high-risk group.

The third observation was that all measures of LA structure and function were significantly associated with incident heart failure or death, after accounting for clinical confounders and measures of LV systolic and diastolic function. Furthermore, the association of LA measures with outcome was consistent after further adjustment for NT-proBNP plasma levels, except for LAVmax.

Despite the compelling results, we need to be mindful of certain limitations. The dominance of functional measures may highlight the vexed issue of indexation to body surface area, which may overcorrect for obesity and thereby underestimate true LA size. Alternative indexation methodologies, which use fat-free mass or height, may lead to better performance indexed LA volume. Second, atrial strain requires additional dedicated tracking software to execute, as it is not part of the standard measurement package on ultrasound machine and reporting systems. It is therefore encouraging that LAVmin and LAEF had independent and incremental prognostic value as they do not require additional postprocessing software.

Another strength of the work by Inciardi et al is the consistency and robustness of the measures of LA function (LAEF and LA strains) and form (LAVmin) to predict clinical outcome. They reported independent associations of these novel LA parameters with clinical outcomes after accounting for LV global longitudinal strain (LVGLS) and NT-proBNP (but not for LAVmax). In a hypothetical situation, if only LA reservoir and conduit strains were associated but LA contractile strain was not, it might reflect the association with LV function, such as LVGLS as these 2 strains are closely associated with LVGLS. The authors depicted the robustness of their findings by showing the independent prognostic value of all LA strains over LVGLS, which is compelling. As an anatomical marker, LAVmin was more sensitive than LAVmax, which is corroborated by other studies on heart failure  and atrial fibrillation. It is probably because LAVmin is closely associated with LA functional markers, such as LAEF and LA strains, mirroring a similar relationship between LV end-systolic volume and LVEF. The consistent and robust findings of novel LA markers of both form and function, reminds us “Form and function should be one” as quoted by Frank Lloyd Wright, an apprentice of Louise Sullivan.

What else needs to be done to ensure that LAVmin and/or LA function are added to routine practice? There are 3 more phases in the evaluation of a novel risk marker  clinical utility (“does the novel risk marker change predicted risk sufficiently to change recommended therapy?”); 2) clinical outcome (via an imaging-guided randomized controlled trial) ; and 3) cost-effectiveness. Further research is warranted and encouraged.