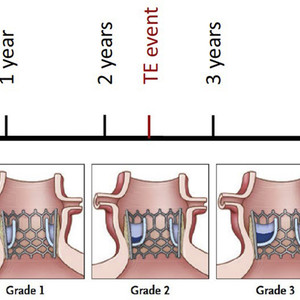 However, it is important to distinguish between 2 types of valve thrombosis, namely clinical valve thrombosis and subclinical valve thrombosis. Clinical valve thrombosis has been reported to occur in 0.6% to 2.8% of the patients after TAVR and is characterized by a sudden elevation in transvalvular gradient; the patient is often symptomatic. The use of computed tomography (CT) has revealed subclinical leaflet thrombosis as a more common finding after both TAVR and SAVR. Thus, valve leaflet thickening and reduced leaflet motion have with reference to their CT appearance been referred to as hypoattenuating leaflet thickening (HALT), and the more severe hypoattenuation affecting motion, respectively. Even though subclinical leaflet thrombosis may be associated with a small increase in transvalvular gradient, this increase is often within the expected range for bioprosthetic aortic valves and will not allow for specific detection on transthoracic echocardiography. Furthermore, this phenomenon is not associated with symptoms. However, it has been appropriately questioned whether subclinical leaflet thrombosis will have an impact on postprocedural outcomes, such as the risk of mortality and stroke, as well as early bioprosthetic valve dysfunction and failure.

In this issue of JACC: Cardiovascular Interventions, Hein et al report the outcomes of subclinical leaflet thrombosis in transcatheter bioprosthetic aortic valves from a single center. In total, 1,606 patients were treated with TAVR between May 2012 and December 2017. For patients without other indications for OAC or antiplatelet therapy, standard treatment after TAVR was dual antiplatelet therapy for 6 months followed by single antiplatelet therapy. Among these patients, 821 (51.1%) underwent CT at a median of 5 days (IQR: 4-6 days) after the procedure. Following exclusion of 17 patients who received temporary OAC after TAVR, the study cohort consisted of 804 patients: HALT in 115 subjects and no HALT in 689 subjects. In the HALT group, OAC was less frequently used (34.8% vs 41.5%), and patients were more often female (61.7% vs 53.0%). The primary endpoint was survival with no difference between patients with or without HALT (70.1% vs 74.0%; P = 0.597) after a median of 3.25 years (IQR: 2.16-5.03 years). The same applied for the secondary endpoints of cardiovascular mortality (13.2% vs 11.3%; P = 0.733) and cerebrovascular events (2.0% vs 4.4%), whereas symptomatic hemodynamic valve deterioration was more frequent in patients with HALT (9.4% vs 1.5%; P < 0.001). However, there was no difference in bioprosthetic valve failure in patients with or without HALT (2.6% vs 1.2%; P = 0.121). In a multivariable analysis, predictors for hemodynamic valve deterioration were HALT, valve type, and small prosthesis diameter. The investigators suggest close supervision and monitoring for patients with HALT after TAVR, but the findings have not affected their use of antithrombotic treatment.

How should these findings be interpreted and integrated into daily clinical practice? First, it is important to understand that subclinical leaflet thrombosis is a temporal dynamic phenomenon that may spontaneously progress and resolve over time without change of antithrombotic therapy. Therefore, it may be difficult to conclude that the finding of HALT at discharge after TAVR is the cause of bioprosthetic valve dysfunction years later. Second, hemodynamic valve deterioration was defined as at least 10 mm Hg increase in mean gradient or a mean gradient of at least 20 mm Hg. This definition carries a risk for classification of patients with patient–prosthesis mismatch as having structural valve deterioration. An updated definition of hemodynamic valve deterioration is an increase in mean transvalvular gradient of at least 10 mm Hg resulting in mean gradient of at least 20 mm Hg, ideally in combination with decreased effective orifice area and/or decreased Doppler velocity index. Whether patient–prosthesis mismatch accounts for some of the cases classified as hemodynamic valve deterioration in the present study is uncertain, but the higher percentage of females and early appearance of valve deterioration in the HALT group raise suspicion. Third, although it has been demonstrated that OAC may both prevent and resolve HALT, this therapy is associated with increased mortality in the elderly and frail patients treated with TAVR. Therefore, as pointed out by the investigators, studies with an extended systematic follow-up regarding hemodynamic valve performance are desirable to investigate the influence of HALT on long-term durability of bioprosthetic aortic valves.

The on-going NOTION-4 trial (Nordic Aortic Valve Intervention Trial 4; EudraCT Number: 2020-003361-19) may provide additional understanding of subclinical leaflet thrombosis and its potential clinical impact. In total, 600 patients with be randomized to different antithrombotic strategies after TAVR and followed for 5 years. Clinical assessment, CT, and echocardiography will be performed at 3 months, 1 year, and then annually up to 5 years after the procedure. Furthermore, additional CT and echocardiography will be done in case of thromboembolic events or sign of valve deterioration (Figure 1).

For the time being, the use of CT to evaluate for subclinical leaflet thrombosis in bioprosthetic aortic valves should not be performed outside clinical studies because this would expose such patients to radiation and contrast without evidence that a positive finding justifies treatment with OAC. However, patients with a new stroke or an increased transvalvular gradient may be considered for CT and anticoagulation in case of HALT.