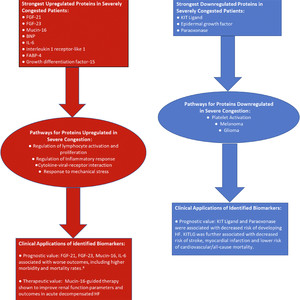 Are We Getting Any Closer to Understanding Congestion?

Congestion is central to the pathophysiology of heart failure (HF) and is the primary driver of symptoms in both outpatient and inpatient settings. However, congestion is often underrecognized, which can lead to incomplete symptom relief, recurrent hospitalizations, and downstream progression of HF. Recent advances have challenged a long-held conception and simplification of congestion as equating to volume overload, and there is evolving evidence for a multidimensional and more nuanced approach to the role of congestion in HF. To capture the multifaceted clinical picture of congestion, clinicians rely on a combination of multiple parameters such as physical examination, natriuretic peptides, weight change, net fluid loss, noninvasive imaging (such as, echocardiography), or invasive hemodynamics for assessment of congestion. Many of these parameters often provide discordant information and have their own set of limitations. Numerous biomarkers in congestion have also been identified and are representative of the complex interplay of multiple pathophysiological processes that culminate in congestion. However, we currently lack a holistic and unifying approach to evaluating the role of numerous biomarkers in congestive HF. Uncertainty in the assessment of congestion often results in substantial variation and inefficiency in the management of HF.

In this issue of JACC: Heart Failure, Pandhi et al have set the stage for establishing an etiologic relationship between multiple biomarkers and interrelated pathways in congestion. The plasma concentrations of 363 proteins were compared between HF patients (both inpatient and outpatient) without (n = 405) and with (n = 142) severe congestion according to a simplified congestion score in the BIOSTAT (A Biology Study to Tailored Treatment in Chronic Heart Failure) cohort. Patients were considered as not congested or severely congested according to the bottom 25th percentile and the top 25th percentile, respectively. Several proteins involved in inflammation, endothelial activation, and mechanical activation were higher in the severely congested group, whereas platelet activation pathways and proteins involved in angiogenesis and remodeling were downregulated. The authors validated their findings in an independent cohort and concluded that the upregulated pathways require further investigation to establish whether these are a cause or a consequence of congestion. It is important to emphasize that the exclusion of ∼45% of patients from the BIOSTAT cohort and 23% of the validation cohort raises the risk of selection bias and necessitates a comparison of the characteristics of included and excluded cases.

A deeper understanding of the pathophysiological processes underlying congestion has important implications. Previous studies have distinguished between 2 forms of congestion in HF: intravascular and tissue interstitial congestion. Different molecular and neurohormonal pathways are postulated to contribute to both types of congestion. Factors implicated in the development of intravascular congestion include low cardiac output, activation of the renin-angiotensin-aldosterone and natriuretic peptide axes, and activation of the sympathetic reflex from cardiac stretch. Alterations in the integrity of interstitial glycosaminoglycans and lymphatic drainage are postulated to lower the threshold for development of edema in the tissue compartment. The 2 subtypes of congestion may present as distinct clinical phenotypes and respond differently to standard decongestion treatments.

The pathophysiology of volume overload in HF is complex and cannot be encapsulated under the sole paradigm of intravascular fluid accumulation or pressure overload. Pandhi et al  have shown that an interplay between endothelial activation, mechanical stress, and inflammation pathways is key to the central pathogenesis of congestive HF (Figure 1) and is linked to fluid redistribution in multiple fluid compartments. The realization that “congestion” is a multifaceted phenomenon, which may arise as a consequence of variable pathologic pathways in different patient subgroups, has made the term nebulous and difficult to define. As such, the biomarker panel identified by Pandhi et al may best be utilized to inform causal pathways and phenotyping approaches to enable individualized treatment of congestion in HF. Our present approach to the incorporation of biomarkers in treatment decision pathways is varied because of the myriad of biomarkers available and the uncertain evidence regarding their clinical utility or applicability to the heterogeneous subgroups of congestive HF. 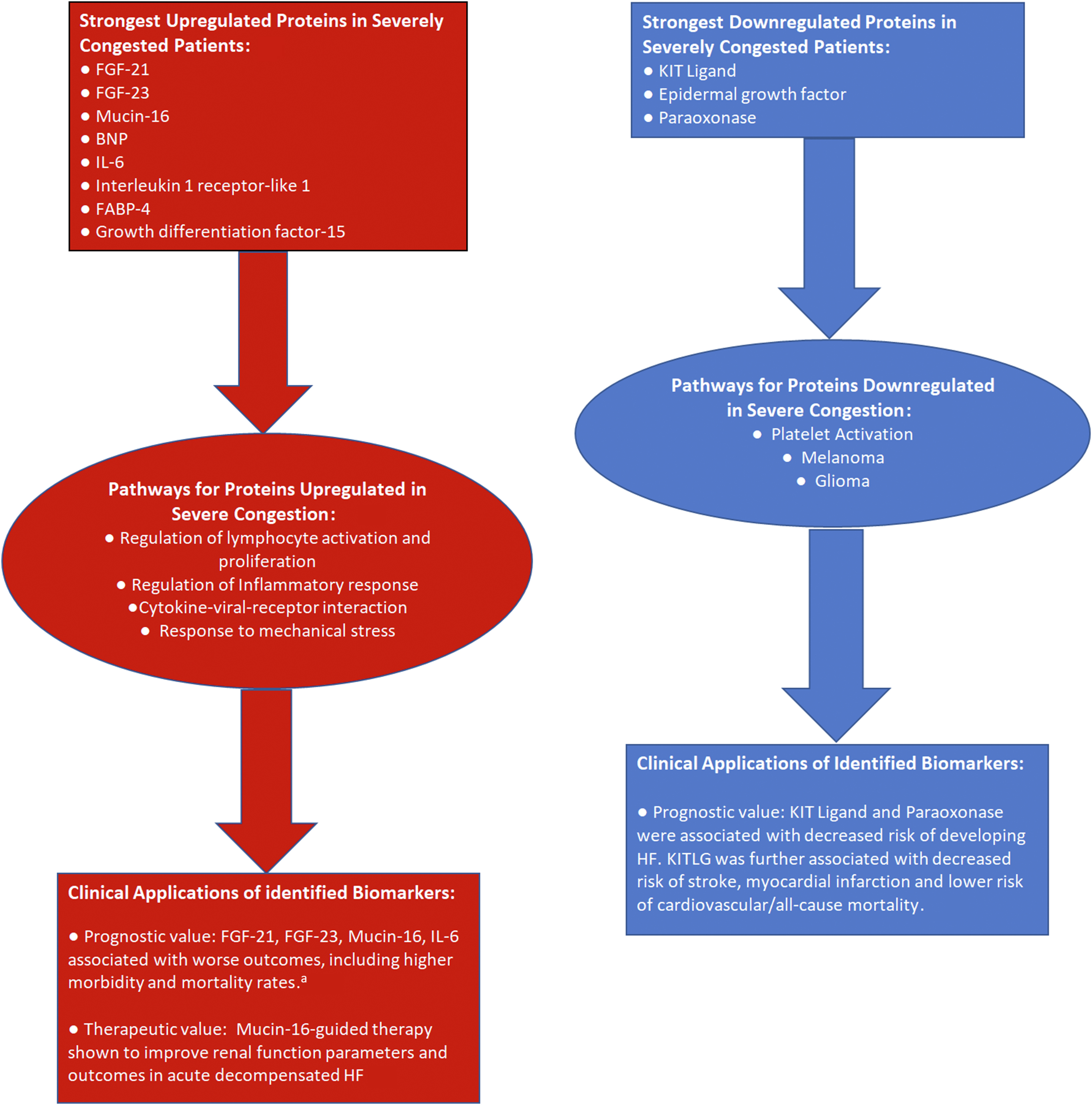 Proteins and Pathways Upregulated and Downregulated in Patients With Severe Congestion

A differential expression of biomarkers in patients with predominantly intravascular or interstitial congestion has been proposed. N-terminal pro–B-type natriuretic peptide and hemoconcentration were identified as possible markers of intravascular congestion, whereas Bio-ADM, soluble CD146, and CA125 (MUC16) were identified as possible markers of predominantly interstitial congestion. Taken together, this establishes a strong case for further investigation of the differential expression of biomarkers to identify patients with varying subtypes of congestive HF. Further study into the temporal evolution of biomarkers could also deepen our understanding of the sequential changes that culminate in congestion.

The findings of Pandhi et al  could inform the development of a multidimensional diagnostic and treatment approach for congestion that may address various steps in the pathogenesis. Present treatment approach in HF is focused primarily on the resolution of fluid overload by means of hospitalization and diuretic treatment; this approach is ineffective for decongestion in cases associated with diuretic resistance and has contributed to the persistently poor outcomes in HF hospitalizations and correspondingly high readmission rates. An attenuated and self-limited response to diuretic therapy in a subset of patients with HF may be attributed to the marked expansion in interstitial compartment volume and dysfunction of the lymphatic system. An evaluation of biomarker expression in patients with diuretic-responsive and diuretic-resistant HF may be a promising area of investigation, with the potential to elucidate differences in the pathogenesis contributing to diuretic sensitivity or resistance. Such an understanding may guide optimal prognostication and therapy among the heterogeneous subgroups of congestion.

In summary, this is a comprehensive and well-conducted study that illustrates the key proteins and pathways underlying congestion in patients with HF. The cross-sectional nature of the study precludes any determination of cause and effect in the pathways identified. Given the multisystem dysfunction arising in severe congestive HF, we cannot be certain that the pathways identified reflect the primary dysfunction arising from HF, or the general inflammatory response in patients with multiple system decompensation. We hope further investigations will build on the foundational work conducted by Pandhi et al and allow for a more nuanced approach to managing congestive HF.